2019’s entering its final days. So perhaps unsurprisingly — as I am the world’s most basic human being — I’ve been thinking about what’s happened in the last twelve months. Not just for myself, though there’s been quite a bit of that. (I took a new job; I attended a brilliant conference; we said goodbye to our dear little cat; I recently left my role at Vox to restart my design practice. But I’ve also been wondering about the industry you and I work in.

Twelve months ago, I was working on a new talk. And I was writing about how it felt as though the Web has drifted from the idealism of its early days, shifting toward something darker. I wrote about Amazon’s Ring doorbell, and its potential for racist surveillance; I mentioned Google’s foray into defense contracting, and its initiative to launch a censored search engine in China; I talked about Facebook’s role in facilitating ethnic cleansing in Myanmar.

Recently, I’ve been thinking about how quaint some parts of my talk feel. After effectively giving Ring doorbells away to law enforcement agencies, Amazon has created “video-sharing partnerships” with hundreds of police forces here in the United States. Microsoft was recently awarded a $10B contract with the United States Department of Defense. And in advance of the 2020 presidential elections, Facebook has signaled it will continue to sell political ads, which are exempt from rules banning misinformation. Things feel like they’re accelerating, and at a much greater scale.

What’s more, there’s been an incredible, terrible human cost to that scale. At The Verge, Casey Newton has detailed the trauma visited upon Facebook’s content moderators, the people who remove extreme, shocking content from the platform, so you and I won’t see it. More recently, he’s reported on moderators at Google and YouTube who’ve contracted PTSD from reviewing violent content. And dangerous working conditions aren’t solely affecting content moderators. In reflecting on the horrific workplace culture at luggage startup Away, a friend said it very well:

I’ve worked in tech for over twenty years. It’s struck me, over and over, how so much of our industry’s “innovation” is often about coercing additional, unhealthy labor out of its workforce. That’s not innovative or groundbreaking at all, it’s just the age-old capitalist playbook — hidden behind better branding and marketing communications.

That realization’s a lot to sit with, sometimes.

I’ll just add that the one thing that’s consistently given me hope over the last year are the ways in which tech workers have begun to organize. From last year’s Google walkouts to the GitHub employees protesting their company’s contact with ICE, tech workers are actively speaking up about exploitative working conditions, about unjust behavior by their employers, and about abuses they see in their workplaces. This gives me hope because, well, it feels like a needed counterbalance to the unchecked, unregulated expansion our industry’s seen in the last decade. In short, our industry’s trajectory needs a corrective, and these workers are getting organized to provide it.

Here in the United States, this organizing’s protected by law — and you’d think the National Labor Relations Board (NLRB) would be bolstering those protections. But the current NLRB hasn’t exactly been kind to tech workers: this year it sided with Uber and Lyft, ruling that drivers were contractors, not employees. What’s more, the NLRB just ruled today that companies can ban employees from using work email to organize. Like the Federal Communications Commission, the NLRB is a partisan body: the sitting president appoints its chair, and new board members. And this board, like its president, seems to have little appetite for siding with the people it’s chartered to protect.

That hasn’t been lost on tech companies. Like Kickstarter before it, Google has begun retaliating against its employees: against those who reported harassment, and against the workers who’ve been helping their colleagues organize. (This, a few weeks after it was revealed that Google has hired a consulting firm that specializes in “union vulnerability assessments.”) And today, a security engineer at Google said she was fired for trying to notify coworkers of their labor rights. Tech companies are moving to stifle their employees’ voices, and to hinder their rights.

I don’t think it’s a coincidence they’re choosing this point in history to act so boldly, so aggressively. These companies are keenly aware of the current NLRB’s pro-business tilt, and are probably confident that it would rule in their favor. In fact, the NLRB’s ruling allowing companies to ban employees from using work email to organize was done at Google’s urging, at least in part. In other words, tech companies like Google, Uber, and Lyft are weakening labor protections not just for their own workers, but for all of us.

As I said earlier, I was working on a new talk this time last year. More specifically, I was trying to corral a jumble of scribbled-on index cards into an outline; from an outline into a script; and then, finally, from a script into slides. And throughout that process — well, “process” — I kept one index card in view. It was the first card I’d written on when I started brainstorming, and it looked like this: 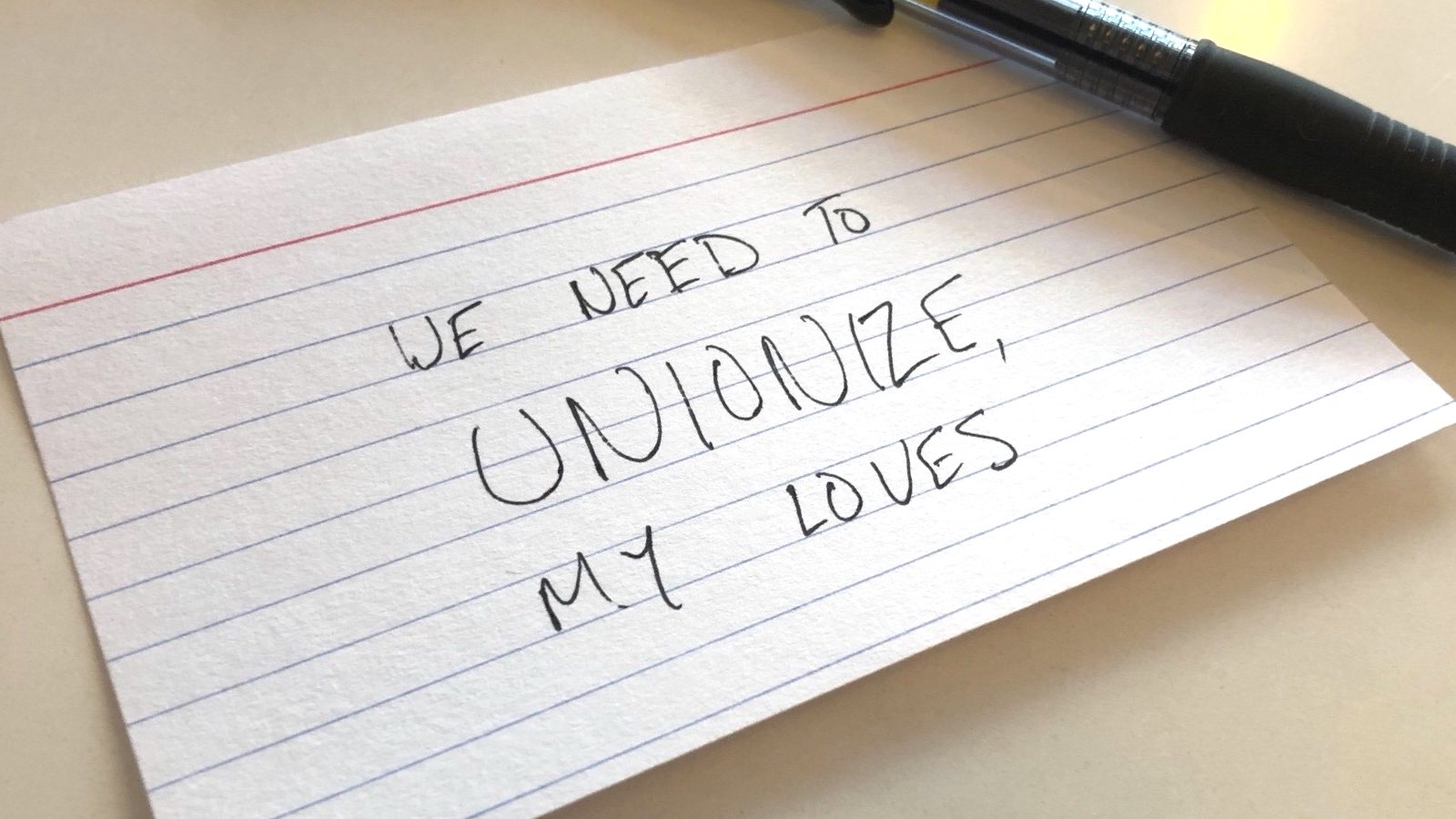 Eventually, that turned into a slide that looked like this: 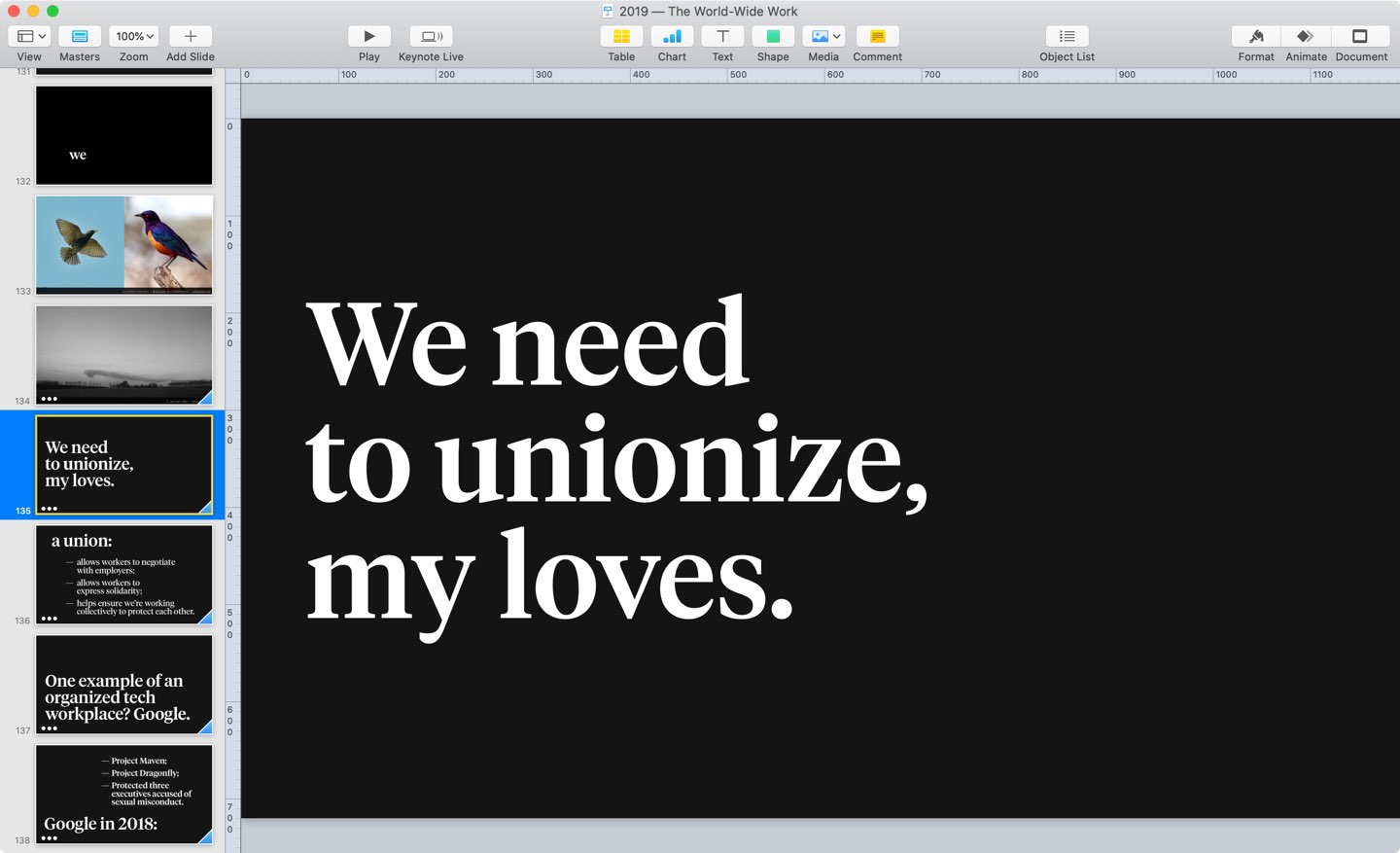 We have a considerable amount of power as workers. No single one of us can fix our industry: it’s going to take all of us, and we need to start now.

Organize your workplaces, my loves. And then, if you possibly can, unionize.

Note: My thanks to Karen McGrane and Scott Jehl for reviewing earlier drafts of this post.